Bigger Is Better: A Recap of the California Regional Event

Levi's Stadium in Santa Clara, California, home of Super Bowl 50 and the San Francisco 49ers, was the perfect venue for 26 print distributors and manufacturers to gather and discuss why "bigger is better" in the print industry.

The group gathered for a lively "Tailgate Happy Hour" at Michael Mina's Bourbon Steak & Pub at the base of the stadium. Being a major signage printer for the stadium, AAA Flag & Banner led a discussion around the large format print segment of the industry and how it can help boost sales for the many distributors in attendance. Focus was placed on how innovation has moved this segment of the industry to the next level.

Following the happy hour and discussion, the group was treated to a behind-the-scenes tour of Levi's Stadium with our very entertaining tour director. During the tour, the group learned that Levi's Stadium is the greenest and most eco-friendly professional stadium in the United States. 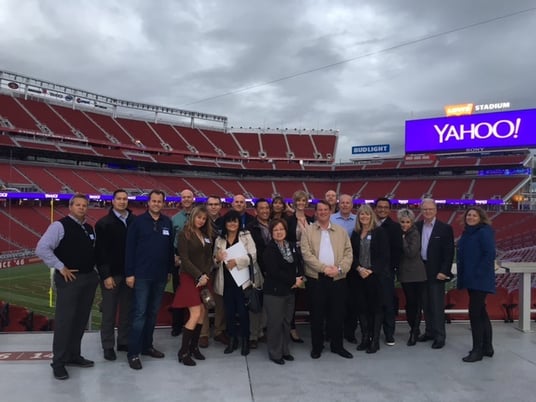 Mike Pisenti of The Sourcing Group, who planned and led the event, said: "We were very pleased with the outcome of this event. The venue and subject matter really got both distributors and print suppliers talking and networking, which was one of our goals."

Thanks to AAA Flag & Banner for its part in making this event a success as well as all the print distributors and manufacturers who attended.