The November/December issue of PS Magazine will include coverage of the 2016 PEAK Award winners. In advance of that issue's release, let's dip into the archives and take a peek (haha) at a previous grand award winner: Fusionwrx, a Flottman Company, which won for Best Cross-Media Marketing Campaign for Client.

Q: Your client is the University of Cincinnati’s Linder College of Business. Let’s start with the challenge it faced.
A: Bloomberg Businessweek is a trusted news source for decision makers and an influential leader of business and financial information. It notified the University of Cincinnati (UC) that to be considered for the 2015 MBA College Ranking, a minimum number of UC alumni and soon-to-be graduates had to register and complete the publication’s online survey relating to the university. Only people who graduated between 2006-2009 and those slated for graduation in 2015 would be eligible.

Q: Why does this ranking matter to the university?
A: Being ranked as a Top 50 MBA program allows for global exposure. Bloomberg Businessweek has a global circulation of more than 980,000, with readers in 150 countries. The university’s Linder College of Business knows this ranking is vital to help the school continue its recent increases in the quantity and quality of MBA applicants, so it had to figure out a way to get the attention of alumni.

Q: So you worked with your client’s in-house design team to create a multichannel marketing campaign. What did the campaign entail?
A: Together, we developed a brandfocused awareness campaign aimed at alumni. The five-month campaign consisted of four personalized direct mail pieces, 11 personalized emails and three UC-hosted events. Each mailer had a unique aspect that was aimed at gaining recipients’ attention immediately. The mailers were crafted so that recipients would be intrigued by the packaging and want to open them. The personalized emails accompanied and complemented the mail pieces, and many of the emails were sent in conjunction with the mailers’ delivery dates. 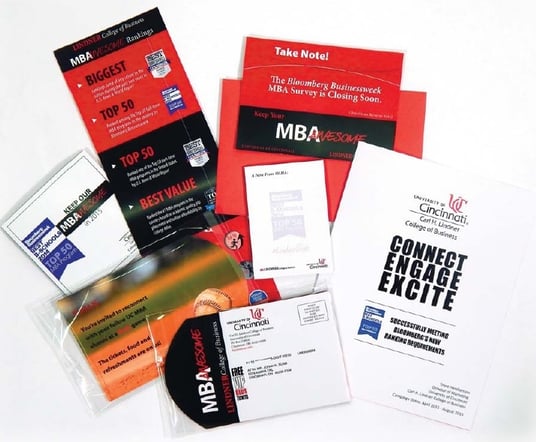 Q: The campaign also included live events?
A: Yes, three events were held at a Cincinnati Reds game. They were open to all alumni, and each alum was invited to bring a guest. While they were enjoying the game, alumni were encouraged to complete the survey for Bloomberg Businessweek.

Q: What results did you help the university achieve?
A: Emails that accompanied direct mail pieces achieved a 46.7 percent open rate and a 13.1 percent click rate. Overall, the emails received a 36.7 percent open rate and a 10.83 percent clickthrough rate. Each delivery of the direct mail pieces led to an increase in completed surveys, as recorded by Bloomberg Businessweek. Each week, the univerersity provided a synopsis of the number of surveys completed, and we used the numbers to craft our strategy to mail, email or both.

Q: How many alums participated?
A: Business school alums and soon-to-be graduating students in the designated years reach a survey participation level of 26.5 percent for full-timers and 31.2 percent for part-timers. These averages outweighed the national numbers of 25.1 percent and 27.2 percent, respectively. UC was one of the fi rst universities in the country to surpass the desired average of 25 percent participation from full-time and part-time participants. And the best part: UC qualifi ed for the Bloomberg Businessweek’s 2015 Top Business School Rankings.