In March 2015, readers of Print Solutions magazine saw a cover that appeared dirty and featured intentionally horrible headlines, including "How to Develop a Campaign That Barely Works" and "Top 10 Excuses You Can Use to Reject New Ideas." To see the rebranded and redesigned PS Magazine, readers were instructed to tear the cover from the top, which unveiled the new look. 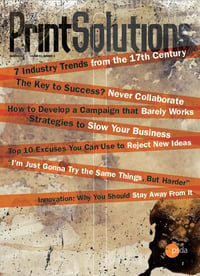 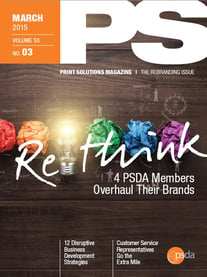 That cover just rose to the top of the most prestigious B2B publication competition in the United States.

PS Magazine captured the National Gold Award in the Design—Front Cover category at the 38th annual Azbee Awards of Excellence banquet, held July 21 at the Poynter Institute in St. Petersburg, Florida. The competition is organized by ASBPE (formerly known as the American Society for Business Publication Editors), the professional association for editors, writers, art directors and designers employed nationwide in the business, trade and specialty press.

The Azbee Awards are open to all U.S.-based business and trade publications. This year, ASBPE received about 1,150 entries.

"Having the best-judged magazine cover in the country in 2015 is simply tremendous, and it speaks to the creativity and hard work of our entire team," said Barbara O’Connor, executive vice president of PSDA, the association that publishes PS Magazine. "We succeed when our members do, and to that end, it's important to deliver a monthly magazine that keeps pushing forward in new ways. The redesign was a major step forward — and a great example of how we deliver value to readers. I couldn’t be more proud of our team."

In April, PS Magazine won a Regional Gold Award for the same rebranding cover, as well as a Regional Silver Award for Overall Publication Redesign.