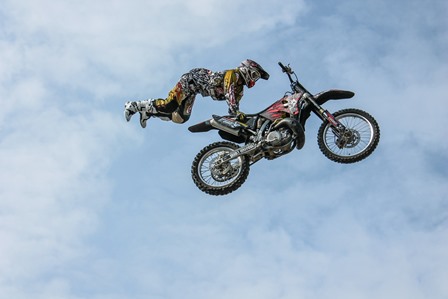 I'm currently reading Stu Heinecke's book "How to Get a Meeting with Anyone." Stu is the guest on a sales training program I listen to occasionally. He is a cartoon artist who draws personalized cartoons to secure meetings with business owners and CEOs. It works. Big time. His secure-a-meeting ratio is through the sales ceiling. And his closing ratio is pretty darn impressive, too.

Heinecke writes about how he and other salespeople get meetings with those oh-so-impossible prospects — the ones that ignore your LinkedIn, Twitter and email requests, phone calls, handwritten cards and letters. (Dare I list fax? Sounds ancient.)

The stories that Stu tells in his book got me to thinking about the craziest thing I've done to get a big account. For that story, climb aboard your proverbial time machine and set the dial to 2006.

I was a 23-year-old sales executive with big dreams. I had identified a 200-plus location, $3 million account whose print and logistic needs could be beautifully solved by our system.

After months of meetings, demos and building relationships, I asked, "Where do I stand? What else do you need from me to make your decision?" The prospect decided to conduct an RFP with the two front-runners: my company and another print broker five times our size. I had a primordial urge to run, cry or hide in a cave and never come out. RFPs made me cringe. My spirit was deflated.

After my self-pity session ended, I made a commitment to myself: I am not going to lose this account. Just because my competitor is bigger and has significantly more resources, I am going to deliver our value proposition in a way that reflects the energy, character and uniqueness of my company. The theme of my campaign was born.

After hours spent researching my competitor, I determined that they were traditional, old school and product-focused. Fortunately, the prospect’s team consisted of four young, cool and hip people who embraced technology and took risks. Big risks.

My proposal was themed "Mission Impossible." I designed a murder mystery manual that contained the RFP requested information. The fonts, pictures and phrases were themed and perfectly aligned.

Rather than mailing or emailing copies of my RFP response, I wanted it delivered in a way that would be remembered. I wanted them to see my creativity and my competence.

At 8 a.m. the day the proposal was due, the four-member prospect team received their first clue. They got magnifying glasses that instructed them to be outside their corporate office at noon. They were to wait for a couple minutes to receive their next clue.

At 12:02 p.m., a limo pulled up. The driver emerged role playing Dick Tracy. He opened the back door and pulled out a locked metal briefcase. Detective music was playing in the background.

He handed the confused team of four a clue. They solved it, allowing them to unlock the briefcase. Within the briefcase, they each found an envelope that contained a clue and instructions for reading the proposal. The driver got back into the limo and pulled away. The team of four headed to their conference room to solve clues and uncover information about our print solution.

I signed a contract two weeks later. I closed my first $3 million deal.

The moral of my story is get to know your prospect and then do something that will get his or her attention (in a good way). Doing what the other sale reps are doing won’t work. Take the time to stand out and give your prospect a reason to hire you. Be bold. Be brave. Be different.